Skip to content
Home/Psychopathy/Psychopathy is no joke.
Previous Next

Psychopathy is no joke.

Psychopathy is no joke

To understand what is happening on this Planet it is absolutely vital to get a grip on the fact that there is another race of beings here with us.

Before you shut down,stay with me on this one and open your mind.

It is estimated that anything between 1 to 4% of the Worlds population are born as a ‘primary psychopath’.

I will explain what a secondary psychopath is in a second, but these people come out of the womb literally brain damaged. The frontal part of the brain does not function properly which sends signals to trigger emotions like a normal human being would have. Basically they cannot ‘feel’ like the rest of us. They operate entirely from the ‘R-complex’ part of the brain or the ‘reptilian brain’ which is completely stuck in survival mode, its reactive, greedy, completely based in self, and it doesnt care what it does to others to get what it wants, it is about control, domination, survival and it is RUTHLESS. Primary psychopaths are often found in positions of power like government, CEO’s of big companies, banking etc. It is completely based in the left hemisphere of the brain which is about order, logic, hierarchy, and rigid thinking. Intelligent but not wise, devious and manipulative, it has no spirituality or ‘holistic’ thinking as it is completely severed from the right side of the brain which would give a normal human being balance. It is in effect quite dangerous. Primary psychopaths cannot be healed, its like being born with no legs, you cannot grow new ones and they are a psychopath for life.

Secondary psychopathy is different in that you are not born with it, it is LEARNED behaviour.

think about the characteristics of a primary psychopath and then look around at the majority of the masses. Service to self, completely out for themselves, little to no care about the World around them, survival mode based in fear, and completely entrenched in the R-complex,. This is particularly the case if you look at the ‘order followers’ in the police and military etc. These people are completely disconnected from spirit, and just by somebody giving them an order, they would kill at the drop of a hat without even questioning whether what they are being told is even moral or not! They are TRAINED to think like this by the primary psychopath who of course wouldn’t take out these actions themselves because they know the Natural Law karmic consequences would come straight back at them! 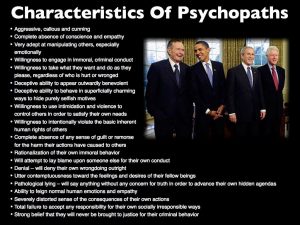 So this is such an instrumental truth as to WHY we find ourselves in a perpetual state of War, why there is so much destruction, poverty and greed on this Planet. It is because the people calling the shots are sick in the head, and so are their minions along with the majority of the population (bar going out and murdering) because they are virtually secondary psychopaths themselves! And we wonder why the World is in a mess. We have to also understand that when we say things like 9/11 was an ‘inside job’ and the US government alongside Israel was responsible, people cannot get their heads around it and they will say things like ‘well they wouldn’t do that would they?’ No YOU wouldn’t do that, but they would because they have no EMPATHY! Who wants War? If you went and carried out a survey in your local town center how many would say they want one? Nobody I bet. So why do we have them? The answer is because the people waging them are clinical psychopaths, and worse still the people dropping the bombs are trained secondary psychopaths. And don’t rely on the masses to step in because they have developed almost all of the same characteristics themselves too! It is not a nice truth to face, but face it we must in order to TRANSCEND it. A psychopath’s biggest weapon is its ability to keep the illness hidden in the shadows,  they are GREAT actors and deceivers. Just look at many politicians, like butter wouldn’t melt in their mouth one minute,  and then dropping bombs on children the next!

The solution lies in realising this mental condition exists in the first place and attempting to not only heal our own mindsets to a more spiritual balanced Nature, but also it is essential we try and reach the minds of the secondary psychopaths doing the dirty work for these maniacs. They CAN be healed and as they start to say no to carrying out the murderous crimes being waged upon innocent people, then the controllers cannot get what they want.

We use cookies to ensure that we give you the best experience on our website. If you continue to use this site we will assume that you are happy with it.OkNoRead more
Revoke Cookies