Skip to content
Home/Matrix/Paedophilia Is Being Merged Into The LGBT Movement.
Previous Next

Paedophilia Is Being Merged Into The LGBT Movement.

Paedophilia Is Being Merged Into The LGBT Movement

The fact that paedophilia is being merged with the LGBT movement is now no longer up for debate. The tip-toeing of the social conditioners who started this movement is now starting to come to the surface for all who have been paying attention to see.

Paedophillia is being merged with the LGBT movement because it is a movement that really propagates that ‘anything goes’. It is an easy route in for the sick people that want this accepted in society to muddy the waters in the minds of the easily influenced, and those who lack discernment and critical thinking. As I mention in my video below they have now coined the terms ‘MAP’ (minor appreciation person) and ‘pedosexual’ and lumped them in with the 40 odd other labels you can now give yourself depending on what side of the bed you wake up on. 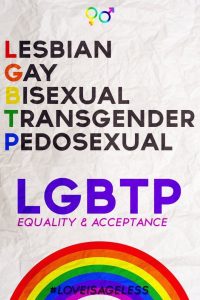 Paedophilia is being merged with the lgbt movement

This is your typical ‘sneak in the back door’ tactics along with other abhorrent ideas being pedaled out around this cesspit that infiltrates all levels of society in what is essentially a paedophile Planet. Is it any wonder that with all the high-level exposure of child abuse oozing out of the higher echelons of society in politics, media, and particularly at the moment in Hollywood, that there is a big push to get this accepted by the masses as soon as possible. What better way than to infiltrate a movement where you can wake up in the morning and just decide you want to be a man, women, baby, giraffe, or nothing at all. It is also being used to gain sympathy for so-called ‘non-offending paedophiles’ these are adults that like kids but supposedly don’t act upon it, as I said a small tiptoe towards the next step of total acceptance.

The problem is you cannot question anything this movement stands for because you get accused of being either a homophobic,  bigot, or that you’re somehow suppressing their free will. Lets get one thing straight I am all for free will and freedom, those are the very things I fight for, but what I am seeing with this movement is that it is imposing ITS WILL ONTO US. We are seeing kids at school who weren’t confused before having speakers come in and give talks about transgenderism and the like. There is a photo doing the rounds (below) of someone dressed up as the Goddess of Lust talking to a bunch of school kids. Kids that should be using their imagination and playing, not thinking about if they should be dressing like the opposite gender, or which sex they should be fucking when they get older. This is nothing short of mental child abuse! The whole scene has turned perverted to the core and this integration of child rape (lets start calling it as it is) is the final straw. 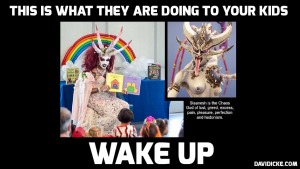 But what are the LGBT movement doing about it? From where I’m sitting it appears absolutely nothing. Like I said if you broach the subject the chips on their shoulders are so huge where they continue to play the victim role, that introducing kid fucking into their precious movement is by the by. If you REALLY care about free will then you should speak out about the toxicity within your movement, and really question whether your movement is in line with morality and care for all.

I couldn’t care less if someone is gay, straight, transgender, transanimal or whatever. As long as you do no harm or cause no loss then do what you like. I understand that some tortured souls have felt like they have been born into the wrong body, but this movement goes way beyond that. It is 24/7 being shoved in peoples faces constantly, its infiltrating the minds of the young who should be allowed to be children, and it is now part of something that wants child rape to be accepted.  That can never be acceptable and this really needs to be called out before we start greeting known child rapists in the street with a smile and a pat on the back!

My vlog below explains more in detail so check it out and feel free to subscribe to my YouTube channel for more information, viewpoints, and rants! If you found this article helpful please share with others to raise awareness, and consider subscribing to my weekly newsletter below to keep in touch with my work and announcements.

Paedophilia Is Being Merged Into The LGBT Movement- by Tony Sayers.